French Immersion is offered in the following schools:

Why choose French Immersion for your child?

On Friday March 6th 2020, over 600 students and staff from all four of our French Immersion schools gathered at Carlton Comprehensive High School for a day of cultural festivities.

to our partners who contributed to a very successful day!

Unfortunately, the 2020 Tintamarre, scheduled on March 20th, was cancelled due to COVID-19 restrictions.  We look forward to the best Tintamarre yet in 2021! On March 19th 2019, the Société Canadienne-Française de Prince Albert (French Cultural Society) organized its second annual Tintamarre as part of national celebrations of French language and culture in Canada.  Over 600 participants attended making the most successful Tintamarre in Saskatchewan! What is a Tintamarre? It is rooted in Acadian culture and is basically a social gathering, usually in the form of a parade, where participants use a variety of visual symbols and especially noise-makers to build awareness in the community of the pride of the local French-speaking population. 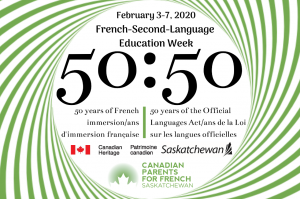 Why choose French Immersion for your children?

In what grades is French Immersion taught?

French Immersion is offered from Kindergarten to grade eight in the following elementary schools:

In what grades can a child initially enter into French Immersion?

Children are accepted into our French Immersion programs in Kindergarten and grade 1.

French Immersion programming is available to any kindergarten to grade 12 student residing within our attendance boundaries.  However, students with no prior French language education, may only enroll if they are in kindergarten or grade 1.

We, as parents or guardians, do not speak French.  How do we support our children in their French Immersion education?

The vast majority of French Immersion parents do not speak French themselves but recognize the value in providing their children with a high-quality second-language education.  As parents, your role is to promote and be actively engaged in your child’s learning.  Our schools are committed to ongoing communications in English with our French Immersion parents to foster ongoing parent engagement.  Recognizing that what is learned in one language is transferable to a second language, you can be confident that the supports you provide to your children in English will also be of benefit to them in their learning of the French language.

Are there any additional costs if our children are registered in French Immersion?

There are no additional costs to having children enrolled in French Immersion.

How do I register my children in French Immersion?