On November 13th through 15th, the SRPSD Board attended the Saskatchewan School Boards Association
Fall Assembly which included the association’s annual general meeting. The AGM was particularly exciting
for the SRPSD Board because they had sponsored two resolutions to be debated at the event held in Regina.
The first resolution: BE IT RESOLVED that the Saskatchewan School Board Association Executive begin
discussions with the Ministry of Education to make joint recommendations relative to the education mill rate.

The rationale behind this resolution was that with the Provincial Education Plan in its final stages of
development, it is crucial that the cost of implementing that plan be supported by funding that is stable,
predictable, and sufficient to meet the needs of students. A portion of educational funding comes from
Education Property Tax, so it is essential that Boards and the SSBA collectively have the opportunity to be
part of the discussion and decisions relative to the mill rate. This resolution was carried with a high level of
support from the Boards represented in the association.

The Second resolution: BE IT RESOLVED that the Saskatchewan School Board Association begin
discussions with the Ministry of Education to jointly review and make recommendations on funding,
oversight, and accountability for all independent schools including Associate Independent Schools, and
Alternative Independent Schools.

The rationale behind this resolution was that while advocating for educational funding that meets the needs
of students, there is a need to perform a thorough analysis and review of the funding of independent schools
as a step toward greater advocacy for equitable and transparent funding. While being debated, the resolution
was amended to include the oversight, and accountability for independent school operations as well. The
amended resolution presented above was also carried by the delegates with support from across the province.
Finally, during the AGM, trustee Jaimie Smith-Windsor was acclaimed as the President of the SSBA. Jaimie
will serve a two-year term in the lead role in the association. Congratulations to Jaimie, we are proud of the
work she does to advocate not only for the students of Saskatchewan Rivers Public School Division, but for
all students in the province. 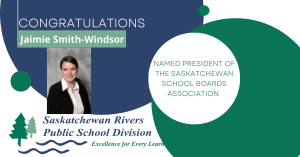