Cancer may have started the fight, but together we will finish it! 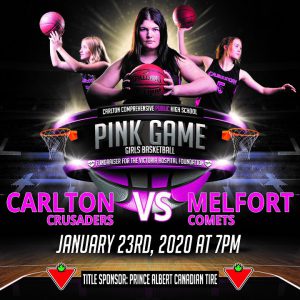 The Carlton Crusaders Sr Girls Basketball team, along with Lead Sponsor Canadian Tire, want to continue the fight! On January 23rd, the Crusaders will play host to the Melfort Comets for the annual Provincial “Pink” game.

The first Pink Game was hosted in 2009 by Coach Al Wandler and the Assiniboia Rockets Sr Girls Basketball team. Originally, Wandler’s intention was to create a legacy of giving back within his team; they raised money for cancer research, purchased pink uniforms, and played the first Pink Game. The following year, they purchased pink uniforms for the team that had visited Assiniboia (the Frontier Raiders), and encouraged them to pay it forward. The Raiders then hosted a game, bought some jerseys for the team that visited them, and a tradition was born. Ten years later, there have been hundreds of thousands of dollars raised and more than 20 teams who have participated in this fundraiser and are proud to sport pink jerseys throughout the season. The Crusaders were part of the Pink Game last year at St. Mary where over $90 000 was raised! This year, Carlton and Melfort hope to keep the tradition alive at the “Carlton Crushes Cancer” Fundraiser Game and we hope you can help us meet our goal!

It is our hope that those who face cancer will be supported in our own community, and that one-day cancer will be eliminated. Thank you for supporting our fight against cancer!

Ministry of Education Message to Parents

A Message From the Ministry of Education to Parents

All Casual employees and Sub Teacher employees will have an ROE automatically issued and submitted to
Service Canada by March 27th, 2020.
If you have any questions concerning EI benefits, please call 1-833-381-2725, or access the link here.